N is for Nice Knowing You 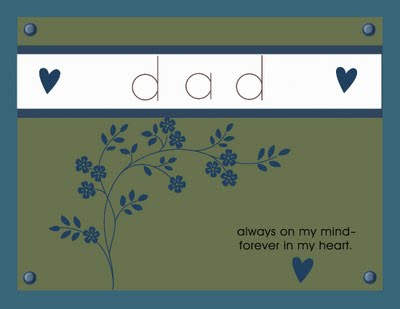 I had a hard time deciding what to post for this day. Today, April 16, marks the 78th anniversary of my father's birth. He will be spending another birthday in Heaven just like he has spent them since 1985. Wow, that has been a long time.
Even thought he has been gone for many years, I can still feel him by me. The night before his funeral, he stood at the foot of my bed all night. I also have felt him he in my home several times after that.
He was an interesting man but he was good to me. He always had my number. He would say interesting things to me. Like, the academy awards have already been given out, okay Sara Burnheart , and your attitude is piss poor. But, he also would tell me that he was glad that I was his daughter.
He really was one of my greatest cheerleaders and had a lot of influence on me.
Thanks Dad, it was nice knowing you. Happy Birthday in Heaven.
My dad really liked It's It ice cream bars. So go out and have one in his honor. I think I will.

For Jesus sake visit me: See the power of positive thinking within you. Please follow my blog and read intersting posts at http://positivethoughts2011.blogspot.com

I understand how you miss your Dad, glad for these nice thoughts. My Mom as been in Heaven 6 years ago this month....I will be blogging about that too.

I never knew this about your Dad. How wonderful to know he was close by, and still is.

What a neat experience to know he was and is close by you in spirit.

Happy birthday to him!

WHat a beautiful post on a wonderful blog. I’m stopping by from the A to Z challenge and I look forward to reading more from you.