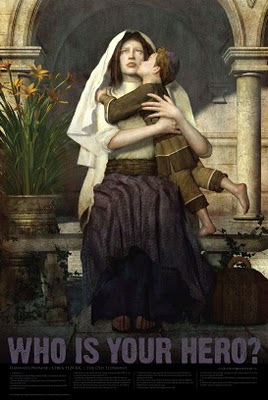 Several weeks ago I did a blog post entitled "Wanted: Kindred Spirit". Well, thanks to a trip to Idaho, a Sunday School class, and a bible story, I found one. Just too bad she lived 1000's of years ago and in a different country. But, none-the-less, she was here and thank God someone recorded her story.

Her story is recorded in 1st Samuel. Hannah wanted a child very badly and was unable to conceive. So, she prayed and in her prayer she told God that if she had a child, she would turn him over to the Lord. Well, Hannah conceived and bore a son named Samuel. She kept him for about 3 years and gave him over to Eli the prophet.

I admire and respect her so much for what she did. In a sense, I had to do the same thing. My son was not born "normal". I had to give up my dreams I had for him and also my dream of becoming a mother again. I had to basically just turn this whole situation over to God.

Anyway, as the years progressed, it became clear that I could no longer care for my son. He was only 5 years old when I had to give him over to someone else to take care of. (as sad and hard as this was, it was the best thing and the people who care for him are beyond fabulous)

Luckily, our stories don't end here. It says that Hannah went on and had other children. I never knew the rest of the story. Her story gives me great hope for the future. I feel that my story isn't over yet. Hannah has given me hope that some day, some other place that my story will end like hers did.

I just wish that somehow we could break our limitations of this world and be able to talk to each other. I would like to ask her questions about how she felt; what was going through her mind. I would also like to thank her for her example of strength and courage she has shown to me.

If this could happen, I just bet, that despite our age differences, we could be kindred spirits.

Posted by Karen Mortensen at 4:43 PM

Beautiful post. I can only imagine how painful it must have been to have to give up your son.

What a moving post. I too am very familiar with the story of Hannah as I endured years of fertility treatments to finally conceive my son and sought Hannah's story for hope.
I am so sorry to hear that you had to give your son over to those who could care for him and can't even begin to imagine how hard that must have been.
Thank you for sharing your story.

I love the story of Hannah, too. And the two of you do share some experience; that's for sure.

It would be neat to talk to these people from the past that are so admirable, wouldn't it?

WOW...what an awesome story. It got me thinking, though...if you are kindred spirits, there's no reason why you couldn't talk to her now...not in a creepy way :o)...but in your mind as you ponder her story, I truly believe we can all connect. She was brave & based on what you did, I feel the same about you!

Happy SITS Tuesday! I love Hannah's story in the Bible too. Your personal story is very touching and I, like you, believe your son is in good hands. Have a wonderful week. Great post!
Cheers,
Eliz

What a beautiful post! I found you at the "Over 40 Bloggers" group and am now following you. I hope you have a wonderful day and I'm looking forward to getting to know you.
Lynn
www.bradybunchplus1.blogspot.com

I think what Eneida said is perfect. Hannah can be a kindred spirit that you can talk to about your shared experiences...

Thank God for the examples of women we have in God's word! I can't imagine how hard it must have been to make that choice for your son. I wrote a post about how much a mother can influence her child in the first years of his life. I was insipred by Jochabed(Moses' mother). If you have a chance it's under "Fave Stories" and its "More, Coffee Please". Your post just made me thinkg you might like that one. :)
Thanks for stopping by and leaving such a heartfelt comment yesterday!

Actually, it's under "Bible Stories".
You can copy this to your browser if you want. I hope you like it. :)

You went looking and you found her :)

Yes I think you should paint yourself up and go to Pier 39! lol...sure would beat your teacher's salary!

I am a new follower. I found you through the Over 40 blog hop. I look forward to getting to know you better.

Karen, I love how you go to the Bible for help and inspiration. So many Biblical characters can teach us life lessons.

Oh, Karen. Wht a beautiful post. I love the story of Hannah. It took me a looong time and MUCH hard work to have my son. He really is miracle...the hard part was staying alive during the pregnancy! (The Myasthenia got really bad). Can you imagine when we get to heaven? You and Hannah can can all day long!

Hi...I love your blog and found it via the Lady Bloggers Society. I have always loved the story of Hannah (and Esther). You sound like a very strong woman. I believe that God's Grace is definitely sufficient, although sometimes I don't feel like it. My story is kind of similar to yours, but I have been unable to have children due to multiple miscarriages. It took years, but I have accepted God's Will and His Grace has been sufficient for me.

I now focus on what else I can do to honor Him and appreciate the life He has given me (hence the idea for my blog). I have bookmarked your blog and will visit often.

Here's the link to mine. I hope you stop by to say hello.

May God continue to bless and keep you.