This is a picture of my father-in-laws family. This was taken in Salem/Sugar City, Idaho about 1930. My father-in-law was here and saw this picture. He said he remembers taken this picture like it was yesterday. He also said those striped overalls were the dress-up, going to town clothes. Those were real fancy clothes back then. 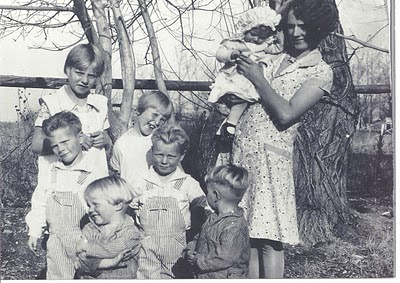 Posted by Karen Mortensen at 8:15 PM

Just the fact that you have the photo is priceless. But to have the names and all those details...absolutely wonderful. I love family tree information and logging all the generations. This is a wonderful photo. Thanks for sharing your families with us.

I love those old photos. How special that your father-in-law is alive and able to share the story with you.

Love these photos...and the history.

If I'm your newest follower? Yes, I am.

Have a nice day.

Great pic, Karen! So wonderful to know the history in a photo! My parents don't have access to documents & don't have many pictures beyond their own families so genealogy is complicated...
What a good idea to keep a record of it on your blog!
happy friday

Love the name of your blog. Found you on FF over 40
kim

love your blog and those old pictures are so cool...I am your newest follower came over from Friday Follow over 40

I love old photos! It's great that you have so much info on who's who in the pic. I have a ton of old photos that I have absolutely no idea who the people are in it.

I am now following you through
Follow Friday 40+!! Love the photos!
Peggy Gorman
http://pegsplay.blogspot.com/

I love this photo and I agree....that you have the history of it is priceless!

That is a great picture, and wow, they have alot of family!!! That is wonderful!

I LOVE old pictures like this! They are really so amazing to me. Thanks for sharing.

I hope you are doing well and that you and your family have a wonderful weekend.

Oh awesome, I love that photo.

What a neat old photo. I so enjoy you stopping by Jeremiah 29:11 and leaving such sweet comments!!!
In His Love...Deb

Wow, I love this photo and your descriptions. It made me think about seeing a picture of myself or people I love and thinking about all the history that is yet to be written. Thanks for the inspiration today!

great photo. it was also to get a brief note on evryoe. thanks

Such a very, very charming family photo! I love the striped overalls! And their mom looks so stylish too with her bobbed hairdo and cute dress.

Blessings & Aloha!
Thank you so much for stopping by :o) I truly appreciate your sweet comments!

What a precious photo. Thank you for sharing this.

Kinda makes you think about the big picture, doesn't it?

The mother's hair really screams 1930. It's interesting to see a real person wearing this kind of style. Also Max's hair looks like they just took off the bowl - how adorable. Great picture. I'm so glad your shared this with us all. I never knew a soul ever from Idaho - let alone their history - until now. Thank you for this Karen. I love reading authentic blogs.

It's so nice that you know such detailed information about your family. Mine just isn't close like that :)

I love this. My dad dug up some family pictures years ago.