My Heart Is Heavy Today 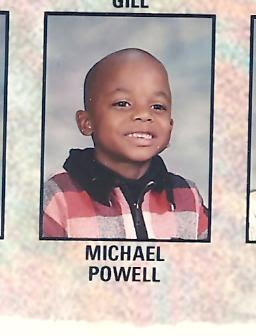 PHOENIX—An Arizona resident has been arrested in connection with the fatal shooting of a California man in 2009.
Michael Powell Jr. was taken into custody Wednesday at his home in the Phoenix suburb of Glendale.
San Rafael, Calif., police believe Powell killed a man in a case of mistaken identity while he was living in Richmond in November 2009.
They say 22-year-old Donald Espinoza-Ordonez was found fatally shot at a San Rafael apartment complex.
Authorities say Powell allegedly had earlier gotten into an altercation with another person in front of the apartment complex. They say Powell mistook Espinoza-Ordonez for the person he was looking for and fired several shots at him, then fled the scene.
The Arizona Republic says authorities tracked Powell to Glendale and he's now facing murder charges.
———

Posted by Karen Mortensen at 10:58 AM

It is not for lack of direction from his first grade teacher this young man went in the wrong direction. Karen is a total professional.

I'm so sorry. You never know what the future holds.

Sometimes you just need to let things go and hand them to God...you did what you could, Karen. You're a wonderful person.

How sad. I guess you just never know what choices people will make as they grow up. I'm sorry.

Oh this would be hard to know. He looks so sweet in 1st grade, as I'm sure he was back then.

That must be so difficult to grasp. I've often thought about that, actually...the fact that every violent person who commits a crime was once a sweet, innocent child. It make you wonder how someone goes from A to Z in that way, doesn't it?

One thing of which I'm certain is that you did much to contribute to that little boy smile he once had.

This totally breaks my heart!!!!!!

The problem with having a great heart like you do is that the world is full of people to worry about...

So, so sad. I'll never forget coming back from summer vacation to find out one of my high school students had been shot and killed at a party. They have a life outside of school, and sometimes it gets them.

What you will never know until the hereafter is all the lives that were touched by you in a positive way--all the little boys that grew up to be just fine. Have hope.