K is for Knowledge 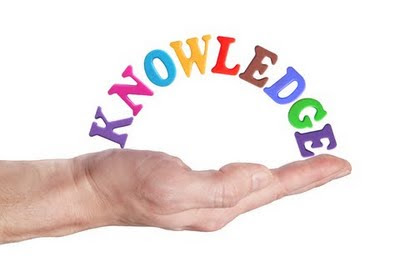 My dictionary had this to say about knowledge. "All that is known or can be learned." It also went on to say,"Knowledge applies to all that one knows and understands of facts and general truths and principles whether gained from books and teachers or by personal experiences and observations."
In order to obtain knowledge I feel one needs to move. One needs to do something. One cannot just gain knowledge by hoping it stops by one day. Let me tell you a story I heard years ago that illustrates this point.
The great philosopher Socrates was walking along the beach with one of his young students. The student told him that he had such great knowledge and that he wished he had as much. The young student also inquired of Socrates how he could gain such knowledge.
So Socrates being the wise man that he was, put his arm around the young man and started walking into the ocean. After they got a little ways in, Socrates knocked the young man into the water and held him down. Finally after much fighting for breath, the young man was let up out of the water.
Socrates then told the young man that when he desired knowledge as much as he desired that breath of air, that he would have it.
But, is gaining knowledge all there is to it? I think the answer is no. I think you need to have wisdom to know what to do with the knowledge that you obtain. Let me use another story I heard years ago that illustrates this point.
This story was told by a man named George Durrant. He told about 2 men that were out deer hunting. They had shot a deer and need a way to get this deer back to their camp. One guy said that he had heard that if you drag a deer by the way the hair grows, then that makes it easier to drag. So they began dragging the deer that way. Indeed it was easier but then one man noticed that they were getting further away from camp.
So my conclusion is this. In order to gain knowledge we must put ourselves into action to obtain it. Secondly, we must acquire the wisdom to go along with that knowledge. In other words, we need to know what to do with the knowledge that we gain.

"K" is also for Karen! LOL Great post...I am so thankful for the knowledge God has allowed me to experience. Knowledge really is powerful.

Also, I lose knowledge if I don't use it. When I was younger the knowledge would stay in my brain sort of. But now, I have to use it right away or its gone.

Elder Durrants story is hilarious! I've come in contact with some very knowledgeable people that were not very smart...
Thanks, Becky Jane

I enjoyed your post. I have always loved studying and learning.On some days I study the Bible for eight hours. Godly wisdom is better than worldly knowledge. Doylene

I pray that I always have a teachable spirit and that I always continue my quest for knowledge. These are great posts, Karen! I'm catching up, as you can see. :)