This is a story that my mom would tell us about sometime. Her dad told it to her and her sister many times as a child. Perhaps this is where "Mother is always right" or "You should always listen to your mother" came from. 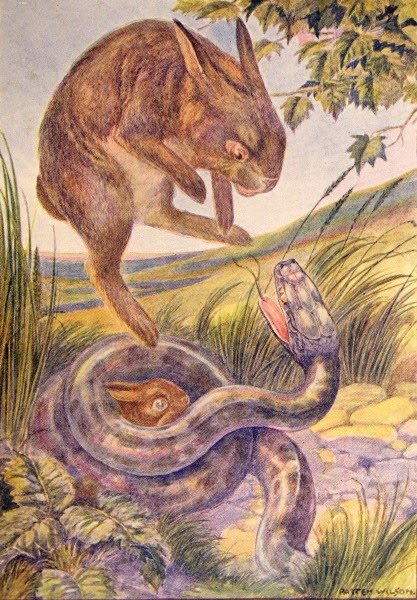 Once there was a little furry rabbit, who lived with his mother deep down in a nest under the long grass. His name was Raggylug, and his mother's name was Molly Cottontail. Every morning, when Molly Cottontail went out to hunt for food, she said to Raggylug, "Now, Raggylug, lie still, and make no noise. No matter what you hear, no matter what you see, don't you move. Remember you are only a baby rabbit, and lie low." And Raggylug always said he would.

The sun was warm, and it was very still.

Suddenly Raggylug heard a little sound, far off. It sounded like "Swish, swish," very soft and far away. He listened. It was a queer little sound, low down in the grass, "rustle-- rustle--rustle"; Raggylug was interested. But he never moved his nose or his paws; he lay still. Then the sound came nearer, "rustle-- rustle--rustle"; then grew fainter, then came nearer; in and out, nearer and nearer, like something coming; only, when Raggylug heard anything coming he always heard its feet, stepping ever so softly. What could it be that came so smoothly,--rustle--rustle without any feet?

He forgot his mother's warning, and sat up on his hind paws; the sound stopped then. "Pooh," thought Raggylug, "I'm not a baby rabbit, I am three weeks old; I'll find out what this is." He stuck his head over the top of the nest, and looked--straight into the wicked eyes of a great big snake. "Mammy, Mammy!" screamed Raggylug. "Oh, Mammy, Mam----" But he couldn't scream any more, for the big snake had his ear in his mouth and was winding about the soft little body, squeezing Raggylug's life out. He tried to call "Mammy!" again, but he could not breathe.

Ah, but Mammy had heard the first cry. Straight over the fields she flew, leaping the stones and hummocks, fast as the wind, to save her baby. She wasn't a timid little cottontail rabbit then; she was a mother whose child was in danger. And when she came to Raggylug and the big snake, she took one look, and then hop! hop! she went over the snake's back; and as she jumped she struck at the snake with her strong hind claws so that they tore his skin. He hissed with rage, but he did not let go.

Hop! hop! she went again, and this time she hurt him so that he twisted and turned; but he held on to Raggylug.

Once more the mother rabbit hopped, and once more she struck and tore the snake's back with her sharp claws. Zzz! How she hurt! The snake dropped Raggy to strike at her, and Raggy rolled on to his feet and ran.

"Run, Raggylug, run!" said his mother, keeping the snake busy with her jumps; and you may believe Raggylug ran! Just as soon as he was out of the way his mother came too, and showed him where to go. When she ran, there was a little white patch that showed under her tail; that was for Raggy to follow, --he followed it now.

Far, far away she led him, through the long grass, to a place where the big snake could not find him, and there she made a new nest. And this time, when she told Raggylug to lie low you'd better believe he minded!

from How to Tell Stories to Children, and Some Stories to Tell , by Sara Cone Bryant

Posted by Karen Mortensen at 6:55 AM

I have never heard this one, but it's good!

I love the story. Doylene

This is what I tell my grandchildren too..."Your mother knows best!"