Happiness Project At Leigh Vs Laundry- We Have A Winner 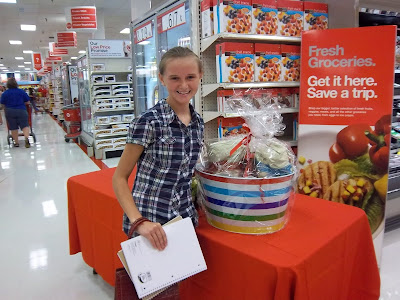 I took a short trip to Clovis last week. While there I took McKenzie to Target. This store had just opened the grocery store section so they were having some raffles. There was a man asking trivia questions to us in order to get a ticket for the drawing.
McKenzie's question: Name one of the Fairly Odd Parents.
McKenzie's response: Cosmo (wasn't he the mascot of BYU?)
My question: Who is the host of Jeopardy?
My response: Which one? (showing my age again?)
His response: There is more than one? (showing his age too)
My response: Alex Trebex.(wasn't Art Fleming the original host?)
Anyway, they had the drawing a little bit later.(McKenzie made us stay) They called the numer on the ticket and it was her. She was so happy. It was a fun day.
The cool part of the whole thing was that the bucket matched her mom's tablecloth.

Posted by Karen Mortensen at 8:26 AM

I wonder if who was the original host on Jeopardy has ever been asked on the show?

Cute story! My little brother (we are 9 years apart) makes me feel this way all the time... Just goes to show how often fads change!

She won?? how fun was that!

I would have failed all those questions. :(

Congratulations on the win! I'm not going to comment about the "old" jeopardy. :)

And that is great that she won!!!

Love this! Leigh vs Laundry does have fun "happiness project" stuff going on. BTW, Hope your medical procedure goes well.