I don't know where to begin with this story except to say that I am overwhelmed with gratitude for my Heavenly Father today. I could really see His hand it what occurred today on the way to work. I was traveling down a very busy freeway on my way to work. The car started to shake a little bit. At first I thought it was the road and then the car really started to shake so I pulled over. As I did, I saw my tire rolling across the road. (funny now) I got out of my car and this is what I saw. 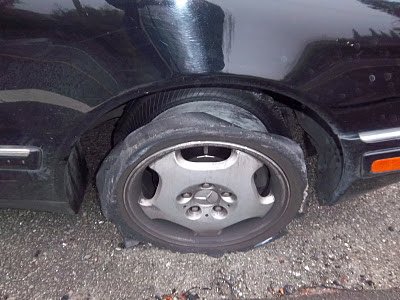 I got on my cell phone and called Tom. Luckily he was still at home and he was not in the shower which normally he would have been at that time of morning. About the phone-later that day it ran out of battery. He said he would be there in a few minutes. So I waited for him.
Also, there just happened to be someone else right behind me that had some car problems earlier and the CHP drove up to them and saw me. After they were finished with them they came over to me. One of the officers told me he had called the freeway service patrol to help me.
I was so grateful I almost hugged him. Do you think he would have arrested me? 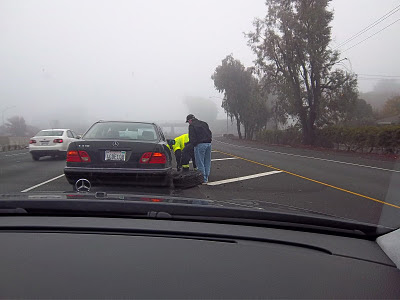 My knights in shinning armor who came to rescue me. 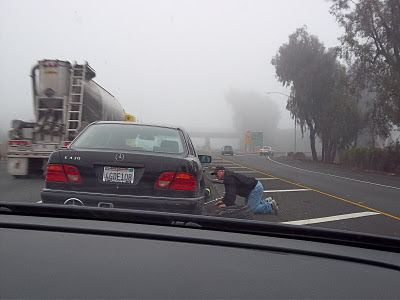 I had a really nice place to pull over. It really couldn't have happened at a better place either. Right parallel to the exit. There were really two lanes of shoulder there. Oh, my tire is over by that tree. All BETTER!!!
Posted by Karen Mortensen at 5:40 PM

Don't you love when people are nice to each other? I'm glad they were nice to YOU.

People Who Know Me Would Say: said...

Karen, Isn't it amazing how sometimes we can see God's Hand at work while it's happening, sometimes it takes us years and hindsight to see it and sometimes we're forever blind to it in this life?

I'm so glad for His divine intervention on your behalf. It always warms my heart when folks help one another.

I'm always grateful I have a knight in shining armor (my sweet hubby) to come help me in those situations. Glad you are OK - praise God!

You have so much to be thankful for. I am so glad God was watching you!

So grateful you're safe. I would not want to have this happen on a CA freeway...yikes!

Don't you just love it when your husband comes to rescue you? That is the best feeling ever!

It is really nice when things come together in a tough situation and even nicer when people show their kind and loving side AND it is always great to have a spouse that will come to the rescue:)

P.S. that was a really nasty flat.

It sounded bad when you wrote about it the other day; to see the evidence ... wow, that is SO scary!!! Good thing you were being watched over ... :)

I love it when we see and recognize the Lord's hand in our lives. So glad that you are doing alright.

So thankful that the Lord had His hand of protection on you Karen. I drive the freeway to work each day too and I can only imagine how frightening that would be. Praise God that everything worked out and your tire was taken care of.

Hey, sweet friend....I left you an award on my blog. You don't have to do the "requirements"...but I wanted to include you, too, cause you mean so much to me!!!